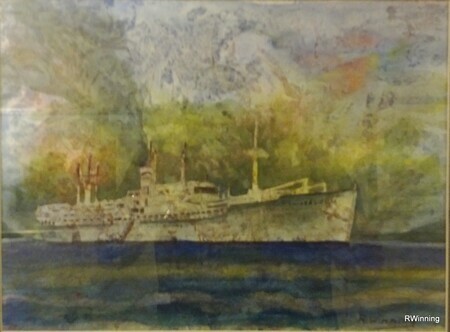 Inquire about this work

I sailed on the Zuiderkrus from Wellington NZ to New York City end may to end June 1961, 31 days through the Chatham Islands,across the Roaring Forty's, stopped at Easter Island until morning and then circumnavigated the island , saw Stone Heads. We went to Easter Island because a sister ship was broken down at Tahiti so our destination changed to Lima Peru and I guess the Captain had time to spare. It was also his last Ocean Voyage and he wanted to see as much as possible. He was and ornathologist and Whale watcher. We spent a full day 7am to 10 pm in Lima then on to Panama. 1 whole day there and then the ship went through the canal the next day. My friend Eddie and myself stayed at the Canal Zone for the day and took the train from panama to cristobol about 2pm I've never met another person who has taken the train across the isthmus of panama and for that sake I hadn't met another person who had even see Easter Island until this year when I met a friend who flew there for a vacation.

1961 wasn't a pleasant time in South or central america for yankees. We got a lot of yankee go home. It was nice to leave Cristibol/Colon and get on the way to the oppulance of Fort Lauderdale and then New York City.

We had only 75 passengers all travelling in the top suites for the convenience of the crew which was only about 75. That never happened to me again.

After we left the ship in Hoboken, it took on 1200 students for a European Vacation where they travelled europe and lived on the ship.